LESS THAN SH2 BUDGET FOR SPORTS, OXYMORONS AND MEDIA MORONS

Editorial mistakes, however tiny or innocent are an eye sore. The annoyance-laden grammatical errors are often sugar-coated as typos, as if that lessens their sting. But at times the intended meaning becomes grossly distorted, courtesy of inattentive copy editors. How can the Kenyan government allocate less than two shillings to sports, in the annual budget? 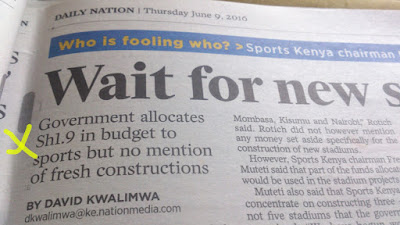 That is the impression created in a sub-heading of an article appearing in the country's leading daily. There's a very glaring omission that renders this assertion nonsensical.

You see it...I see it...but apparently...the newspaper's combined editorial and production hierarchy could not detect it.

Who knew a 'b' could be that important. I'll try to let it be.

In another section of the same paper, a story is told of a bank that has embarked on a very peculiar quest. 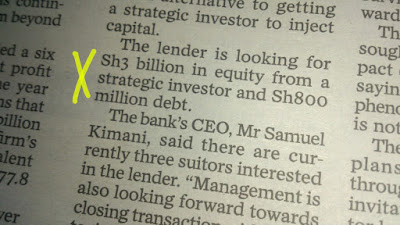 Other than Sh 3 billion in equity from a strategic investor, the lender, it appears, is looking for a:

This Thursday edition was a gem of a publication for seekers of press peeves.

Lo and behold! The country's monopolistic electricity provider, is also pained by its own inadequacies. 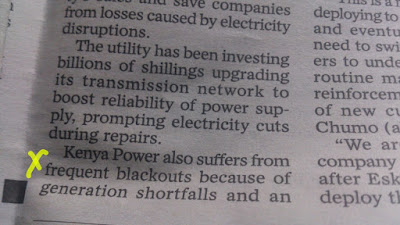 It's maybe possible but hard to draw a different conclusion from the part of the highlighted article. 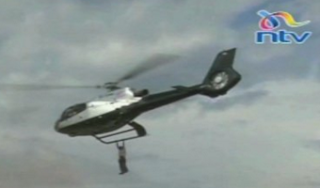 Anyone remembers the 'super' man who hang onto dear life below an airborne helicopter? 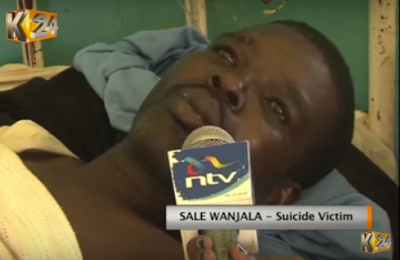 He later resurfaced in a hospital and granted one of the local TV stations an interview, as a 'suicide victim'.

It's hard to tell if that was a functional oxymoron or someone was just being a moron.

they employed the wrong editor instead of employing you

thanks for your material.