Divisive politics is generally frowned upon by the Kenyan media. It does,  however, appear like the press has divided political loyalty. And if one cuts through the pretentious projection of editorial neutrality, a disturbing underlying political bias is likely to be encountered. That's how angling of a story and apportioning of prominence can be so divisive. 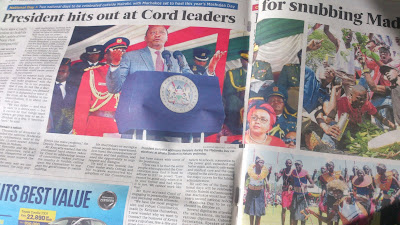 One paper decides to scream out an admonishment by the government directed at the opposition, in the context of a 'snubbed' invitation to a national day celebration.

Granted, an invitation to the ceremony was not honoured.

And probably, some people can impute this to be disrespectful to the Head of State.

Another paper though, provides a different perspective, that prominently explains the absence of the opposition, in the national day event. 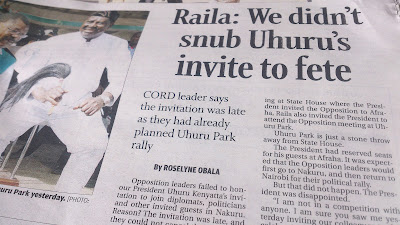 It's as if Paper 2 is deliberately trying to undo any potential political damage emanating from what Paper 1 has published.

Or Paper 1 is deliberately trying to downplay the point being amplified by Paper 2.

Yet somehow, readers are supposed to rise above divisive politics, because a divided press says so!

We should avoid divisive politics we are one