WHEN SECOND IS THE LEAD, LOCAL CONTENT, AND A TV RATINGS RAT RACE

That the Kenyan broadcasting industry is competitive is not disputable. So, every opportunity to brag how your channel is doing better than rival stations, is most certainly going to be fully exploited. It's all fair and square, until coming second becomes the same as being in the lead, in the ratings rat race.

If a TV station is part of a wider multi-media enterprise, you are likely to see sister platforms trumpeting any perceived success of one of their associated outlets. 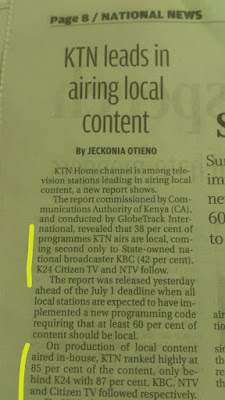 Admittedly, the exaggeration itch is often very difficult to ignore, and one is bound to see an overdose of gloating and showboating.

The context it seems, can be easily manipulated to create self-serving favourable content.

But fidelity to facts should not be in question, even when reporting real achievements or pseudo-accolades.

It therefore requires some stretching of the imagination, for one to believe that coming number two, justifies a headline expressly stating a channel:

Even the first paragraph of the self-aggrandising article is alive to the fact that this particular TV station is only among the leading pack.

Such distortions of the truth in the ratings rat race, can never change the fact that being second is not exactly the same as being the leader.

The one who is first reserves all the rights that appertain to leading, being number one, the best, and other allied top drawer rankings.
Posted by Albert Gachiri at 08:49