REPAINTING GOOD NEWS INTO A MASTERPIECE OF BAD NEWS

Interpretive journalism is a celebrated departure from the numbing run of the mill reportage. It helps scribes to tackle the 'so what' aspect of news coverage. But in so doing, the default path must not be one that is paved with negativity. The almost impulsive criticism of government especially, could be justifiable, but it often repaints good news into a masterpiece of bad news. 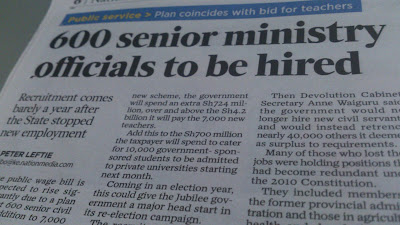 But such is the unfortunate nature of Kenyan media outlets. In the pursuit of an elusive and almost mythical objectivity, positive news portrayal is often misconstrued to imply being too close to the establishment.

This provides a fertile ground for contradictions in the local press.

For example, if the government downsizes its workforce, due to economic constraints, the focus almost inevitably will turn to the plight of the affected people, and how they are staring bleakly into an uncertain future.

(It does make you wonder why such stories are never found to be relevant, when media houses declare their own employees to be redundant).

And so you expect the same media to applaud the state, in those 'rare' instances, when there's recruitment. 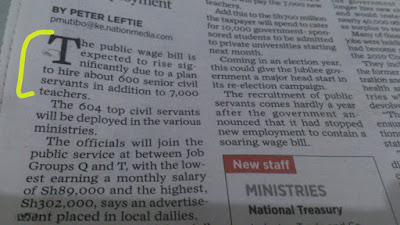 But no. You are probably more likely to encounter such a depressing beginning of an article:


"The public wage bill is expected to rise significantly due to a plan to hire about 600 senior civil servant in addition to 7, 000 teachers."

Of what gain is it to repaint good news into a masterpiece of bad news?
Posted by Albert Gachiri at 23:11