The sheer lunacy of some newspaper editors in Kenya can seriously erode one's capacity to remain sane. Upholding simple professional standards can seem like such a complex undertaking. The heading of an article, being at variance with the first line of the article, should be easy to spot. But not all editors, apparently, can execute this routine task. 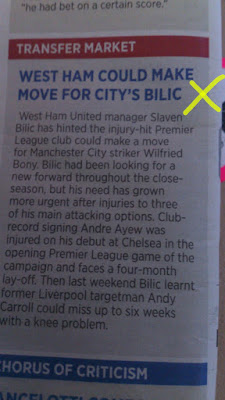 Probably, the person crafting the heading is not the same person who wrote the article, or even subbed it.

But that's no excuse for publishing editorial nonsense!

According to this article, appearing in the country's leading daily:

- West Ham is a football team in the English Premier League.

- The manager of West Ham is Slaven Bilic

But what does the heading of the article say:

West Ham is interested in signing its current manager, (from City?), according to the same manager!