It is becoming difficult to get a clear understanding of important issues in Kenya, based on media coverage. The public's watchdog turns into a ferocious attack dog, only to end up looking like a lap dog. The audience get's confused in the process, especially when information is packaged haphazardly. 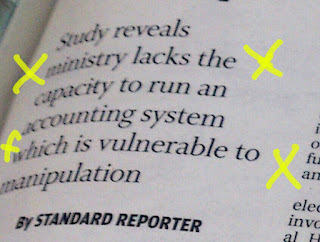 I very much want to believe the editor of the above article is aware the message being sent out is that it's DESIRABLE to have:


"...an accounting system which is vulnerable to manipulation."

Or alternatively, the said ministry is being EXONERATED from any financial mischief because it:


"...lacks the capacity to run an accounting system which is vulnerable to manipulation." 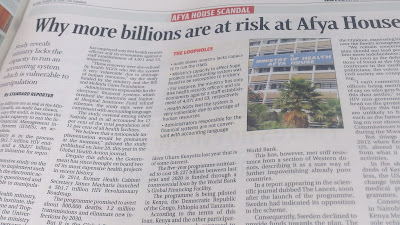 Is there still a place for dependable media accuracy, which begets factual coverage that responsibly pushes credible information to the citizenry?

A big story suddenly starts sucking in those adversely mentioned.

The media outlet that unearthed the supposed scandal is also hard pressed for alleged non-disclosure of self-incriminating facts.

And evidently, this has not escaped the scrutiny of the public, as depicted below.