It's an often asked question. Does language determine thought, or it's the thought process that influences language? For the media in Kenya, other languages often seem to dictate how ideas are expressed in English. And in the absence of an equivalent expression, the default is direct translations. 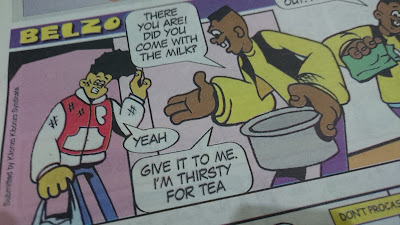 A debatable case in point is the above cartoon strip.

Hypothetically speaking, the creative mind here (or the support editorial brains), could have had an internal monologue in a local dialect, and it made sense to say:

This, by all means could be perfect English, but it sounds quite awkward both from the mouth and to the ear

The equivalent in, say Swahili, would be:

What would work for me in this case is:

But I'm not a teetotaler!