A number of unions in Kenya have instructed their members to down their tools, in the wake of floundering negotiations with the government. The local media has tried to balance between highlighting the public's interest and the demands of the workers on strike. But some TV news graphics seem to be passing subliminal messages in solidarity with the strikes. 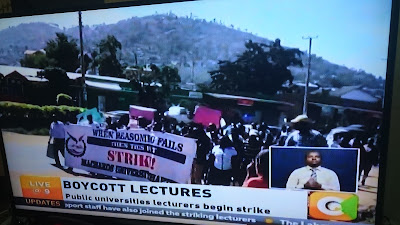 Is it a case of deliberate endorsement or an editorial oversight?

Who is being urged to 'Boycott lectures'?

Is it the audience?

Or is the on-screen graphics meant to pass a call to action message to those not aware of the industrial action?

The first look at the lower third information tag, and a second look at the visuals of striking workers, could possibly help rally support for more institutions to join in. 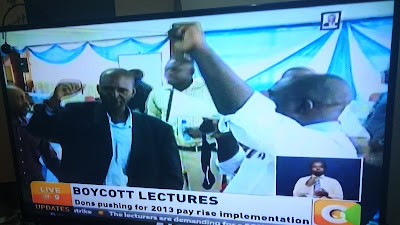 And not only can more lecturers be mobilized to join in the strike, university students can also be persuaded to abandon their classes.

So much for neutrality in news coverage.

So little of average gatekeeping.