It is no longer desirable to ignore the demands of a digital media environment, and a demanding audience, wielding immense powers because of available options of content and channels. But this should not mean that the media should carelessly experiment in the hope of giving their audience a fresh experience. This can result in a busy TV screen and a multimedia strain. 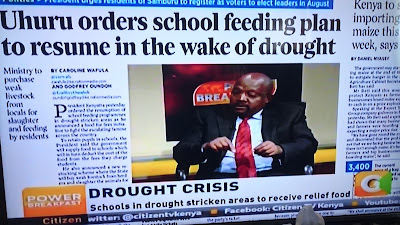 Yes. It's good to tap into different media formats and either align the content with the best option or even use  a combination to create a multimedia product.

But no. You just don't put together any mashup, and deem it fit for audience consumption, like it happened with one Kenyan TV station.

As depicted above, the TV screen appeared to mirror a web page, probably in the hope of making it look savvy and edgy.

Actually, what was being beamed on air was an online article from another media's website, but with the additional eye strain of a talking head video, being aired live and literally boxed into webpage.

So in one go, your eyes are juggling between reading the headline of the article and the speaker's gesticulations as he makes his point, as well as the lower third information tags.

The ear too gets a piece of the action, trying heard to listen to what the subject is speaking, as the mind works hard to process all these elements, to make them different from nonsense.

Work with multimedia but desists from causing multiple eyes, ears and mental strain for your audience.