DASHING THE MYTH OF DASHED HOPES

In times of rising political temperatures, some say the media should remain neutral. Others argue everyone is a political animal and that media owners and members of the press are better off declaring their political affiliations. It is foolhardy though, to purport to represent the views of an entire country. There's need to dash this myth of dashed hopes. 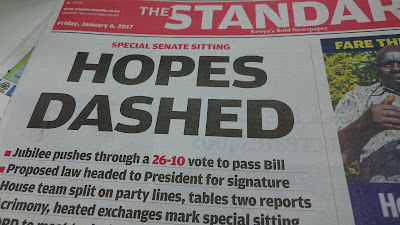 So, going by the front page scorcher above, just whose hopes were dashed?

I can't recall harbouring any expectations that in the end were not met, (I know many others probably did).

But that perhaps shows the media shouldn't generalise with such overzealous abandon, (unless it is a case of agenda setting with a hidden agenda).

After all, politicians in Kenya are more known for over promising and under delivering, at the highest cost to taxpayers. 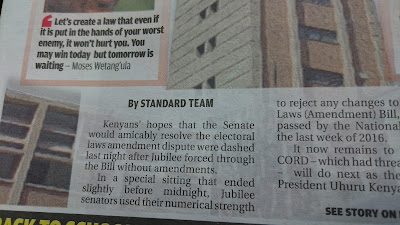 In any case, those who support the ruling party/coalition are also Kenyans, and it is not hard to imagine they are jubilating!