Those tasked with crafting headlines for newspaper articles, often come up with brilliant word plays that effectively capture the intended mood and communicate the salient points as well. But then there are times you look at some  headlines and cringe, in spite of some gallant attempts at raising the bar of creativity. Some sports headlines in Kenyan newspapers come dangerously close to hate speech. 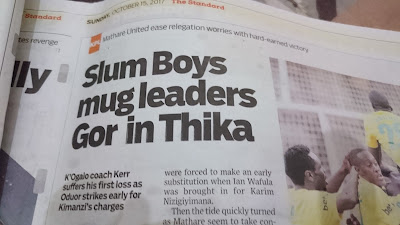 It may seem like an innocent attempt to amuse or delight readers with catchy headlines, but it's naive to overlook the serious undertones that might also be inadvertently projected.

In the 'insensitive' headline above, the 'judgemental' headline writer seems to have long concluded that mugging is synonymous with 'slum boys'.

And come to think of it, 'mugging' is actually being glorified here!

You see, in plain language, the sub-editor is saying a team with many players drawn from Nairobi's informal settlement of Mathare, defeated one of Kenya's most successful football clubs.

In my opinion, the headline below is making a mockery of the downfall of a once vibrant supermarket chain, going by the manner in which the defeat of the firm.s football team is being reported. 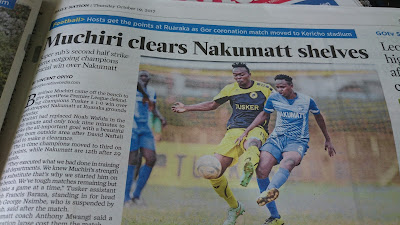 It cannot all be about seeing the funny side of other people's misfortunes.

Sadly, as previously noted several times in this very forum, it seems local sports pages happily continue with this trend, irrespective of the likelihood of such headlines being utterly offensive.

No. It's no defense to argue that it's all in jest.
Posted by Albert Gachiri at 23:43

It's never that serious! Your last sentence nailed it. Sports is about fun and excitement, jest and light touch. Otherwise it would be so boring! "Tusker beats Nakumatt" is hardly uplifting and downright boring...

My worry is that there's a real risk of crossing a red line if the inspiration behind such headlines is simply to pump up the excitement. Granted, cold facts can be drab and downright boring. But I'd rather that than propagating negative prejudices, like equating people living in slums with muggers. Even if it's in jest, it's awfully distasteful.