Some media mistakes are unmistakable. However much you try to rationalise an editorial blunder, it still beats simple logic. And even if you successfully resist to pass judgement, it still remains a case of poor judgement. In many a Kenyan newsroom then, it appears there's a very dedicated error generator.

That perhaps is the only way to explain why armed with a set of clear facts and contextual information, a TV news station elects to feed the audience with utter nonsense!

A power generator goes missing in one of the counties. It is traced to a facility linked to a former governor of the same country.

But after a 'gallant' effort to condense these details, and craft a one liner story tag that would fit into the limited on screen space, the 'brilliant minds' at work bombard viewers with this textual horror:

Yes. There's a generator involved. A former governor is also a significant detail. And there's mention of a hotel in the story too. 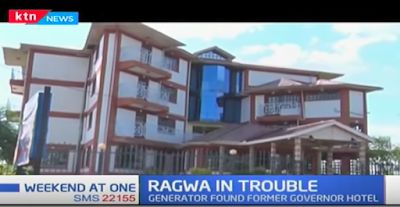 Even in the bygone era of the telegraph, this error would not be tolerated.

Keywords are important in summarising information.

It's supremely key for the chosen words to communicate meaningfully.