The impact of social media is no doubt profound. So disruptive has it been that mainstream media now often fall short of the expectations of their audiences. But mimicking the no-holds barred approach of social networking platforms could be disastrous for legacy media. And a parental guidance disclaimer could become a necessity, to shield young ones from this type of media misguidance. 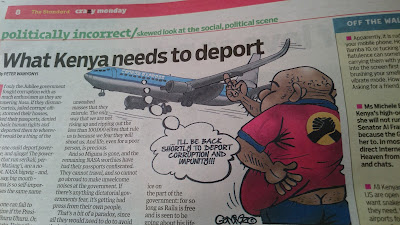 Editorial gatekeepers ought to consider parents, who innocently buy a supposed family newspaper, only to encounter disturbing images that could rob their children of their innocence.

It is also common ethical practise to render expletives or any obscene language in a manner that sufficiently captures the essence of a story, without upsetting obtaining decency standards...or appearing to glorifying profanity.

In this category definitely falls common or even popular curse or swear words.

The president of Philippines could be foul mouthed.

But that doesn't give a Kenyan newspaper the express permission to expose its entire readership to Duterte's raw and 'vile' public communication skills.

Arguably there are those who might not see anything offensive in the last paragraph in the article, containing a quotation from Duterte.

But I can bet on the ever-living tenets of good manners that sensitivities in a significant number of readers, will be upset by this brazen disregard of ethical considerations.

Moreover, it's almost guaranteed that this same newspaper has had numerous instances, where its chosen to deploy a less portent version of the explicit four-letter word, to at least lessen its tasteless sting.

And the intended meaning, mood or tone, I am convinced, was still relayed, but in a more socially appropriate manner.

There is a time and place for jokes and looking at the lighter side of life, aside from serious media content. 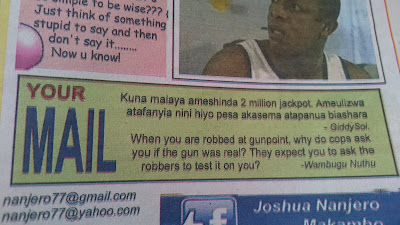 However, being plain trashy, even for the not so puritanical, can be just so nasty!

The moral of this story is that mainstream media should be more like the custodian of society's morals.

And less like the social media corrupter of public morals.