DEAL OR NO SWEETHEART DEAL

The media often enlightens the audience about subjects or issues that were hitherto unfamiliar. Publications that ply their trade in English can be particularly useful to learners of the language. But the lesson can at times be hard to grasp, if it's assumed that the meaning will be apparent to everyone. You can't take heart that the deal will be sweet. 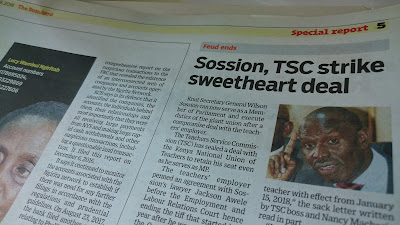 In the above article, reference is made to a 'sweethearts deal' in the headline.

An average reader is likely to be perplexed because 'sweetheart' is a common endearment term, that oozes heavy romantic undertones.

There are two parties in this case alright, but one is an institution...the one that employs teachers in Kenya...and the other is a top representative from the teachers' labour union.

A stranded reader may as well be left wondering what a 'sweetheart deal' is all about in this context.

Well, the paper is correct in the sense that this is an acceptable expression, meaning a sort of favourable agreement.

But it's dead wrong to use search a term, without giving proper contextualisation, to enable the reader to derive the right communicative value from it.

Deal with this doubt sweetheart!