It's been argued that the media's penchant to broadcast or publish negative stories can lead to emotional or psychological trauma on the audience. The sad news may be factual, but does it distort the reality? That could be the case, especially when the media appears to threaten the very existence of society. A morbid headline promoting child mortality is a sure way of killing humanity. 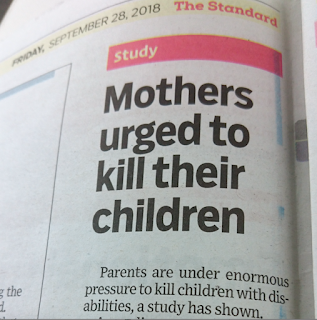 In the above newspaper article, very critical elements of journalism are missing...and that gives the headline quite a chilling effect.

Even a casual glance at that headline, is likely to deliver a guaranteed repulsive reaction.

And that is only if the reader can survive the shock of the unintended repugnant message.

The elementary attributes of a news story missing in this abhorrent headline are CONTEXT, and...well...ATTRIBUTION!

There's a barely there indication that the headline is drawn from a conclusion of a study.

However, in the absence of a direct link of the findings of the study and the article's headline, one is left with little choice than to think the newspaper has no problem with anyone calling on mothers to kill their children.

Moreover, it's only in the first paragraph that one gets to understand the context of the story...that it has to do with children born with disability, and their parents being pressured to kill them.

These reckless omissions by the editor make the headline morbid, and its details sordid!
Posted by Albert Gachiri at 22:49