You never can tell if it's going to be the last time to see someone alive. And neither can other people be certain they will get a chance to see you again. It's a very high stake gamble. Hence  the need to be extremely thankful for every moment spent with family, friends and colleagues. It's hard to believe that Prof. Chris Lukorito Wanjala is no longer with us. 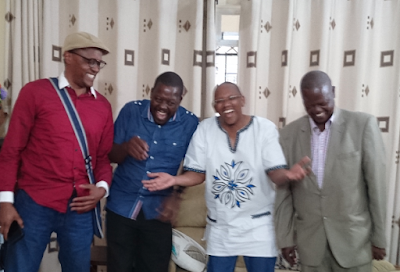 Painful as this reality is, I will always remain grateful for the opportunity to host the late literature don in my house, shortly before his demise.

Prior to this glorious get together, I had extended an invitation to other people privileged to have interacted with the literary critic par excellence, in the course of our university education. 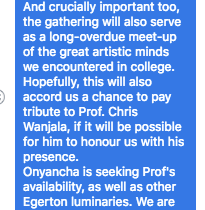 Unbeknownst to many of those invited, this could have been a a final and befitting opportunity to show their appreciation to the man who played such a key role in shaping their various careers.

We had a wonderful time with the few who made it for this meet-up.

It was such a joy to hear him say how happy and fulfilled he felt, and how proud he was of our 'little' achievements, so far.

Unbelievably, Prof. breathed his last less than three months after the meeting in my house.

He was instrumental in helping me secure an internship at the Kenya Broadcasting Corporation, which was the foundation for any of my accomplishments in TV news reporting and production.

Prof. Wanjala also helped me to secure a scholarship to advance my studies in the UK.

As a literature major student, Prof. Wanjala had broadened my world view, as if aware how critical being a global citizen would be, later in my career.

I fondly remember how he introduced me to Japanese Literature, through the works of Daisaku Ikeda, and especially how astonished I was by the testimonials from survivors of the atomic bombing, during World War Two.

What I read in the books provided by Prof. Wanjala, was to later spectacularly deliver an even more shocking blow, when I had an opportunity to visit Hiroshima, in Japan, and take a tour at the Peace Museum, where the horrors of the American bombing shake the very core of your consciousness.

And even the semblance of media criticism exhibited on this platform, was moulded from drinking copiously from his cup of immense knowledge, during his memorable lectures.

Away from classwork, Prof. encouraged us to explore our creative abilities and unleash our performance talents on stage.

He also acted like a moral guardian, ensuring we don't stray too far, driven by our 'juvenile' dare-devil approaches to life.

Together with my very close friend, we once tried to get him to join us for a drink, hoping he would equally 'facilitate' the flow of alcohol.

Till we meet again Prof. You are proof enough that angels live among us!