A newspaper of record should strive to uphold the highest standards. Errors are not always understandable. But admitting mistakes and publishing apologies is admirable. There's a thresh-hold, however, in the frequency of blunders, beyond which readers begin to question the credibility aspects and professional integrity. Editorial abdication often leads to a reign of errors. 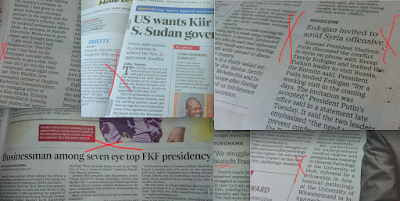 For this 'reputable' Kenyan paper, there have been plenty of repugnant editorial bloopers, coming out of its production line, lately. 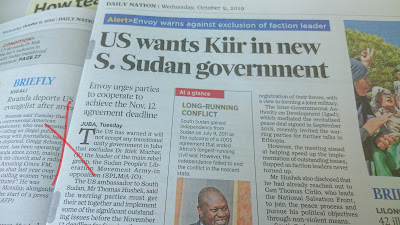 Even when it appears to be an effortless undertaking, like re-reading the headline and comparing it with the intro of the article below, the sub-editor elects to mix-up facts.

The headline talks of Kiir, the picture shows Machar and the Intro also makes reference to Riek Machar. So, the headline contradicts the article!

And how weird is it to see initials being used in a story, followed by a word that's supposed to be part of the initial initials. 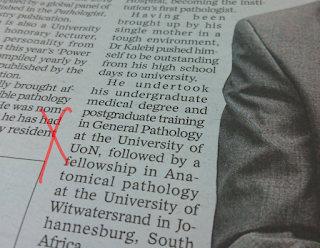 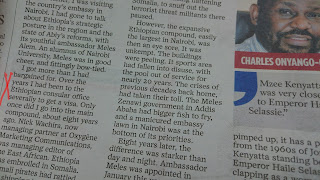 Even the best of columnists, are note spared the agony of this kind of editorial ignominy. Here, it appears like the difference between 'several times' and 'severally' is not so apparent.

Indeed, as a media entity celebrates 60 years of 'quality' journalism, it's not too much to expect that it's gatekeepers would be conversant with the geography of the region it operates in. 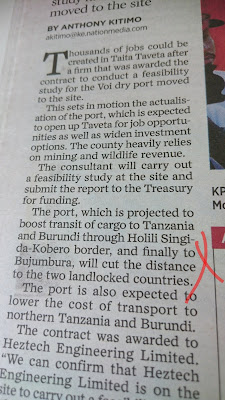 I mean, how ignorant is it to state, nay, publish for posterity, the fallacy of Tanzania being a land-locked country?

Like it has been pointed out here so, so many times, there's an elaborate newsroom and production process, to ensue there's a minimal number of errors, before a newspaper hits the news stand.

The optimal situation is to have a flawless press.

But impressive as that aspiration maybe, it's simply not achievable.

There's, however, the expectation that if all the responsible hands do a good job, then the outcome will not be bad for the brand.

Losing sight of the principle of editorial oversight can lead to very unsightly publications.

It's a pity that even petty mistakes have become pretty much normal.

One could be easily tempted to conclude that the casual manner in which these articles are proof-read, reflects the seriousness accorded to fact-checking or cross-checking of details before they are published.

It's good for a newspaper to admit it's mistakes and take corrective measures. 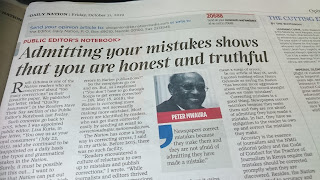 But if this becomes the norm rather than the exception, it wouldn't take an exceptional reader to read between the lines and see the underlying incompetence.

So, here's to more editorial abdication and reign of errors!
Posted by Albert Gachiri at 16:59