Am I missing something, in my endeavour to pinpoint cases of 'grammarcide' in Kenya's various media outlets? The consistency of the local press in churning out these subverted literary gems, could perhaps be suggesting the butcher of English language, as known formally, is the way to go. 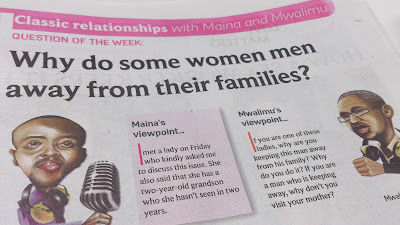 Probably, in a twisted, long-short, non-certain and lackadaisical way, the various forms of language rules abuse, which seem to escape the 'keen' eyes of editors, could in the end enrich the same language being defiled.

In the example above, could the person who crafted the headline, have been inspired to create a 'new expression' that conveys a 'deeper meaning' by association?

You see, starting with 'Why do some women men away...........,' presupposes a certain character trait in men, that is so well known to be associated with the male version of  homo sapien that instead of trying to use so many words to explain it, you just say, 'men away' and the meaning is clearer and more direct.

And when you ask, 'Why do some women men away away from their families?' anybody can see the 'clever' juxtapositioning of women, men and families, right?

Come to think of it, don't you just marvel at the way the words 'women' and 'men' have been ingeniously placed next to each other, without the need of a conjunction or any other 'obtrusive' syntactic element?

Or even more incredibility, isn't there a 'fascinating' indication of the existence of a breed of women, who also happen to be men?

Applause! Applause! Time for me to man away!

Email ThisBlogThis!Share to TwitterShare to FacebookShare to Pinterest
Labels: The Star