The fascination with everything western, it appears, might take a while to wear out. How else do you explain the strange 'coincidence' of Kenya's leading newspapers having identical headlines? Did the editors think any mention of America's Federal Bureau of Investigation in their splash, would automatically attract readers? 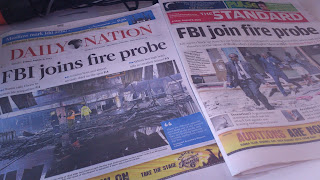 A newspaper headline can very well determine how many copies are snapped up at the market place. And so editorial managers spend considerable time and energy to craft the most appealing splash.

And here, differentiation with what the competition has to offer, bolsters a paper's unique selling proposition.

So mush so that, some unconfirmed reports suggest editors could go to the extent of calling each other, before putting their respective papers to bed, just to be sure their product has a 'secure' chance of pushing sales.

It's just like the way nobody wants to appear at a party, only to realize they are wearing the same outfit as their friend, or anybody else for that matter. So the way great effort is made to stand out, is similar to the drive by the print media to appear unique, in as much as they could be carrying the same content.

But, going back to the identical headlines, what prompted all the major Kenyan newspapers to prominently state that foreign investigators have been called in, to probe the massive fire that disrupted operations at the country's main international airport?

If you ask me, it was either another 'shameless' reflex action that points to an unhealthy fascination with the West, or maybe the result of watching too many movies: