PERILS OF BOSSING SHOLLEI, THE BOSS

An out of court settlement from the custodians of a fare and just Kenyan society, is raising some rather unseating queries. Is letting bygones be bygones the new benchmark of justice? As long as one can raise sufficient dirt against one's accuser, it seems, one can eventually have one's way. 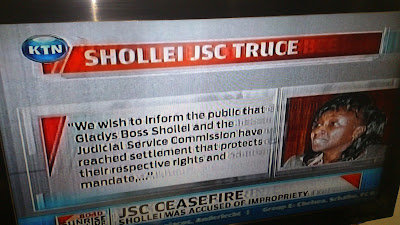 This has perhaps been clearly demonstrated, in the controversial manner in which Kenya's Registrar of the Judiciary has managed to fend off accusations of professional impropriety raised by none other than the Judiciary Service Commission.

Thankfully, the local media has picked up the significant implications of the apparent push and pull in judicial circles, and more so, the factors that could have led to the curious out of court settlement, in a case involving the top most echelons of the Judiciary.

And the social media scene was also buzzing with this issue, as sampled below.