DUE APOLOGY TO KENYAN MEDIA OVERDUE

Denials about officers from the Kenya Defence Forces engaging in looting, during the Westgate Mall terror attack, have now been dissipated. For a while, the Kenyan authorities had trained their negative energies on the media, for bringing to light this atrocity. That's why due apology to the Kenyan media is now overdue. 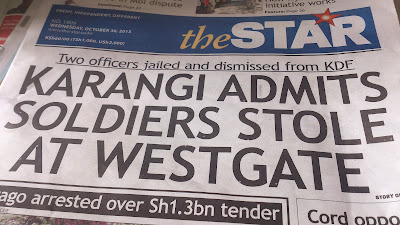 In an exemplary fidelity to truthful reporting, local scribes, and later the international press, showed the devilish operation of some security officers, in the course of carrying out angelic duties.

But questions still abound as to whether the entire truth has come out, or is KDF just doing some damage control.

This, after the public outcry that greeted their explanation of troops captured by CCTV cameras, as having only been 'looting' bottled water.

Sample below, some reactions from the social media: