FUTILITY OF SMOKING OUT STATE OFFICIALS, EVEN IN A SHOW THAT IS SMOKING!

The build-up was frenetic and the buzz around the anticipated comeback of a popular talk show host, left many Kenyans in a frenzy. The country after all, still yearns for answers, after the Westgate Mall siege. But, in the end, it confirmed the futility of smoking out state officials, even in a show that is smoking! 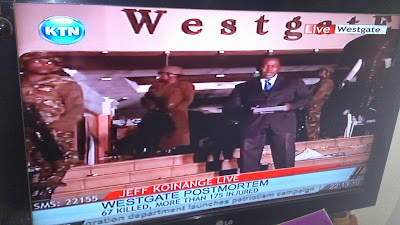 It has become increasingly clear that government officers are not interested in giving 'wholesome accounts' of what exactly happened, when terrorists attacked one of Nairobi's premier shopping outlets.

There are just too many versions of events, and variations of key facts being disseminated. And the more the media keeps prodding, the more the confusion that is generated.

Local media houses go to great lengths to try and secure 'exclusive' interviews with top authority figures, and in all honesty, great effort is also put into coming up with questions that matter.

But there just doesn't seem to be a sufficient will to divulge 'non classified' crucial information. Whether this is justified or not, is arguably debatable.

So by now, journalists should have realised the near-non existent possibility of milking coherent information from government big shots. Attempts to put the officials on the spot, only serves to spur more contradictions.

Instead, investigative desks in the various media houses should seize the opportunity and do their own undercover probes, cross-check with relevant multiple sources and piece together comprehensive reports about the deadly Westgate Mall attack.

Note, however, that this should neither be a race to unearth the most goriest of details and footage, nor an ill-advised sprint to divulge too much 'sensitive' information.

In other words, the findings should not be used to further compromise the safety of Kenyans, but should help the country deal with any gaps in its security structures.
Posted by Albert Gachiri at 16:28