THE ANATOMY OF A HIGH VOLTAGE STORY - DISMISSING OR DEFENDING DISMISSAL?

It probably is a high voltage story. Especially for one particular Kenyan media outlet. But in an apparent editorial stunt, the same news outfit has put out a misleading online update. It perplexingly appears to justify that which is being so vehemently fought against. 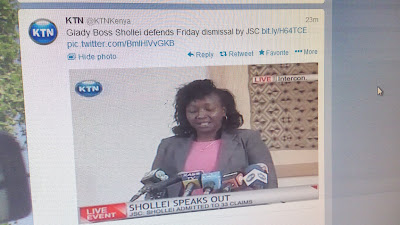 The recently ousted Registrar of the Kenyan Judiciary, has been on the war path, in a spirited attempt to clear her name and salvage her reputation, in the wake of impropriety accusations levelled against her.

"They proceeded to carry-out their own Kangaroo investigations, the process of fair trial had not began yet they terminated my services."


So how, some one please explain, can she abruptly be purported to defend the decision by her accusers to send her packing? That is what... "defends Friday dismissal..." would imply, right?

The content of the media briefing being alluded to, is clearly contrary to the heading that is being used to disseminate the video clip via the Internet. 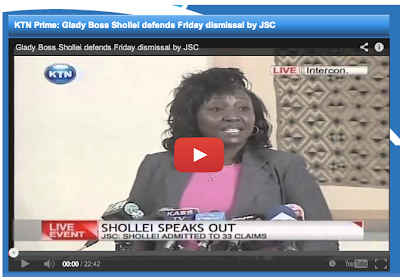 And if this is proved to be erroneous, it could be quite embarrassing to the said media house.

More so, given the manner in which the current flowing through this 'high voltage story' is perhaps being felt right to the upper echelons of the same establishment.