EDITORIAL SABOTAGE: THE MAKING OF MISTAKES WHILE CORRECTING MISTAKES

That editorial blunders abound in Kenyan mainstream newspapers is indisputable. English language deficiencies are regularly on display. But at times, one wonders if some mistakes actually emanate from acts of sabotage, by those tasked with cleaning copy, before publication. How else can one explain mistakes in an article correcting other mistakes? 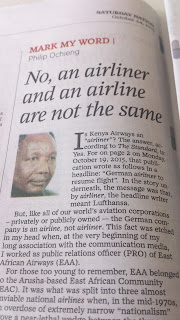 The situation is difficult to understand, because the author of the article is one of the most accomplished senior journalists in the country.

And he is widely renowned for smoking out poorly written newspaper articles.

His grasp of the inner workings of global languages is authoritative and impeccable.

He can convincingly argue that the Indo-European question mark symbol, is etymologically linked to the mid-14th century fish hook, found in the Great Lakes region.

It is thus very surprising that this particular veteran can make careless spelling mistakes.

And more so, in a newspaper article deeply entrenched in his characteristic didactic role.

Drawing from his long experience in the industry, he had once again embarked on enlightening readers, writers and editors alike, on proper deployment of English language elements, to express intended meanings. 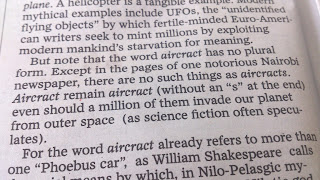 But unbelievably, this is what assaults the eyes:


...But note that the word aircract has no plural form. Except in the pages of one notorious Nairobi newspaper, there are no such things as aircracts. Aircract remain aircract (without an "s" at the end)...

All I can say is:

I Accuse the Press!
Posted by Albert Gachiri at 21:58