That facts are sacred is never in question in the business of news. Politicians, however, have been known to be sacrilegious, when handling facts. And unfortunately, this is what the Kenyan media thrives on, to push their news products. But, it is more worrying if news editors desecrate facts. 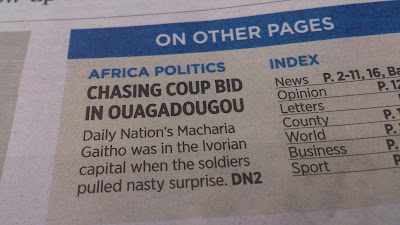 West Africa. Burkina Faso. Cote d'Ivoire/Ivory Coast. Abidjan. Ouagadougou. A foreign media outlet can barely be excused for mixing up these hard facts, in the form of African countries and cities.

An African media house simply ought not to not know that Ouagadougou is not the Ivorian capital.

You see, the media prides itself in its watchdog role, which makes it safe to assume there is an inbuilt fact-checking mechanism, not entirely infallible, but generally reliable.

So, once in a while, (although it's more like regularly for local media), mistakes do happen and apologies are subsequently published.

But the different levels of gatekeeping, are primarily designed to ensure factual errors are not part of what is published in the public's interest. 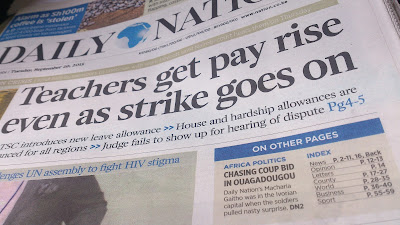 It is thus puzzling that a reputable, (hey, biggest in the region), Kenyan newspaper can allow such a 'little' monumental error to appear on the front page of its premier publication.

If your vision is to be the 'Media of Africa for Africa' then you better know the continent real good!

telas mosquiteiras said...
This comment has been removed by a blog administrator.
8 October 2015 at 22:48