OF MEDIA REPORTING ABOUT MISFORTUNES OF FELLOW MEDIA OUTLETS

For a long time, there had been an unwritten rule within Kenya's mainstream media, about not reporting the not so rosy internal affairs of any media house. But nowadays, tribulations of one media company are no longer a no-go zone. And sadly, beneath the veneer of projected sympathy, the coverage at times borders on rejoicing about a rival's misfortunes. 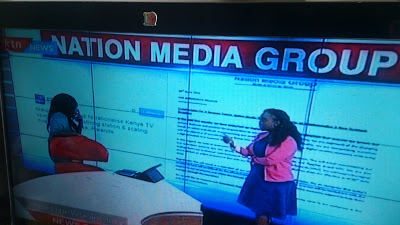 Job losses in the media industry are an emotive subject, hence perhaps the justifiable need to highlight this issue as public interest.

The press after all, routinely provides copious coverage of reorganization, resizing or restrategizing decisions, both in public and private entities, which result in redundancies.

But in so doing, there's little room to speculate that a media house could not be neutral in its coverage, although some vested interests in the downfall of particular establishments, cannot be entirely ruled out. 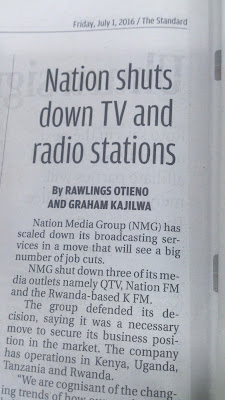 Some other factors, however, come into play, when it comes to one media house reporting about the goings-on in another outlet, possibly a direct competitor.

Should the struggles of one media company be viewed as an opportunity to shore up ratings or perceived superiority by its rivals?

I sincerely hope this is not, has never been, and will never be the case.

In the end factually, what goes around comes around.

Think of the manner in which one evening, a TV station stretched its coverage of the alleged disbandment of the Kenyan presidential press team.

The same channel was 'forced' to report news of it's own parent company's 'massive' layoffs, barely 24 hour later.

I should know a little bit more about these situations.

Sometimes back, on a very rare occurrence, I was sitting in the interview panel that was recruiting reporters for a then yet to be launched TV station, which has now just been closed down.

One of the applicants had unilaterally left previous employment, and I sought to know why.

"Are you a quitter?" I self-assuredly enquired, proud to be a direct hitter.

The very next day, I was handing in my resignation letter!

The Almighty has a way of humbling us...and we should be grateful it does not entail eating grass like Nebuchadnezzar.