Personal grief is a private affair, even for a public figure. The pain of losing a loved one is no less for those in the public eye. But most importantly, anyone experiencing such a tragic loss deserves to mourn in dignity. The media shouldn't pry into this private space, beyond the confines of ethical coverage. Using such a a sad occasion for commercial gain is in very bad taste. 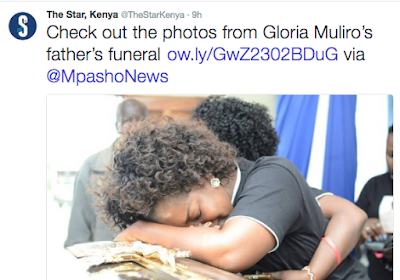 A case in point is the way a section of the Kenyan media sought to shamelessly drive traffic to its site using its report on the funeral of the father of a popular local gospel singer.

From the way the link was posted on social media, it appears like the target audience is not expected to empathise with the artiste.

Instead, the audience is being enticed to click on the link, with a collection of photos taken at the funeral.

From the link, which insensitively starts with:

... the dominant tone almost makes it seem like it was a joyous event, hence the voyeurism bait.

And the exploitative nature of the media wickedly shines through.

In a civilized society, the pain of a distressed mourner should never be trivialized!