A HEADLINE'S PROMISE AND A DELINKED ARTICLE'S PREMISE

A headline is primed to sell a newspaper if on the front page, and any article elsewhere. This means a lot of responsibility is bestowed on whoever is tasked with crafting headlines. A reader has every right to feel offended by an article's headline that seems unrelated to the story it's calling attention to. The headline makes a promise, but the article's premise is delinked from it. 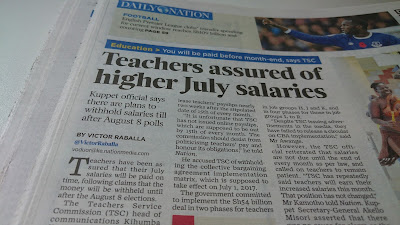 It's pretty much like ordering a burger only for the waiter to call you a bugger...now that's ugly!

So, in the newspaper story above, the main headline states: 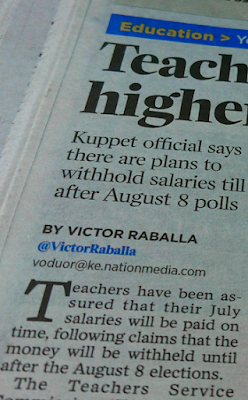 Now the obvious expectation is that the story will be about salaries...higher salaries...for the month of July...being assured to teachers.

The deck introduces a twist even before the reader gets to the body of the article, by proclaiming:

'Kuppet official says there are plans to withhold salaries till after August 8 polls'.

At this point, there appears to be some conflicting elements in the story being anticipated.

One angle talks of higher salaries, while the other alludes to fears of salaries being delayed.

An already confused reader would want to get clarity from the story intro.

But the story's first paragraph is more closely related to the information contained in the deck, and bears no resemblance to the contents of the headline.

It is beyond temptation to assume an editorial preference was given to the higher pay angle, as opposed to the delay in payment contention.

If that's not deception, what else can you decipher?

(Try not to link the defective headline to elective politics in Kenya).