Biases in media coverage can be subtle. They can also be very blatant. During this electioneering period in Kenya, the press is trying to project some semblance of balance, in the coverage of various political camps. But such pretentious neutrality becomes evident, once in a while. The news slant translates to skewed objectivity. 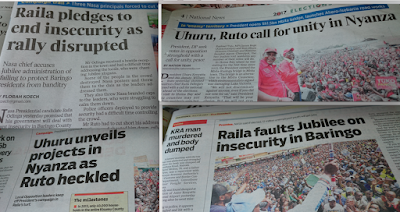 Notice how similar disruptions in two campaign rallies were accorded different headlines in the two leading dailies in Kenya.

In other words, one paper gets to be nice to the political establishment, and very liberal in giving prominence to negative aspects of the opposition.

And the other dishes the reverse treatment across the political divide.

So, it's like the country's main dailies have entered an election coverage pact, either between themselves, or with their political affiliates.

It will be interesting to find out if the dividends of this arrangement are political or purely commercial!