Kenyans are awaiting the verdict from the Supreme Court, after a marathon of court hearings. There are two main political sides in the presidential election petition. It thus looks mighty suspicious, when a section of the press chooses to give prominence to one side, without openly having declared any allegiance, beforehand. 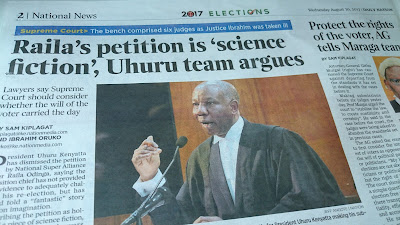 The placing of the story above could easily create the impression that the selected party is the one that matters the most.

The content for the other side in this dispute can only be accessed by turning the page, in this particular publication. 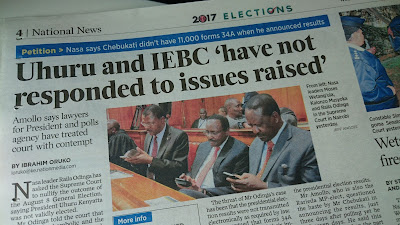 And whereas the headline of the 'preferred' article has proper attribution, the other one is kept vague, almost as if it's taboo to make a direct reference to the petitioning side.

Notice too, the picture selection in one story depicts a lawyer engrossed in arguing the case, wheres in the other, we see senior opposition politicians concentrating more on their phones.

Gladly though, this apparent bias was note elevateldy reversed in the rival daily, as is 'normally' the case.

Articles of both sides in this dispute are placed next each other, (try and ignore which side comes first). 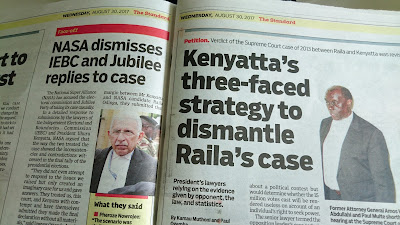 The treatment of this important story by the press perhaps would potentially affect how a particular media outlet is treated by the side that emerges victorious.

My lords and ladyships, it is my humble submission though, that it's in the public's interest for the press to accord balanced coverage in this electoral dispute.
Posted by Albert Gachiri at 22:28