THE HIGH FIGURE OF DEFINITIONS OF FIGURE: GO FIGURE!

English can be a strange language undoubtedly. And that's probably one reason why the media in Kenya often makes a mess out of communicating even simple information. Sometimes though, what the local press publishes can deceptively look wrong. 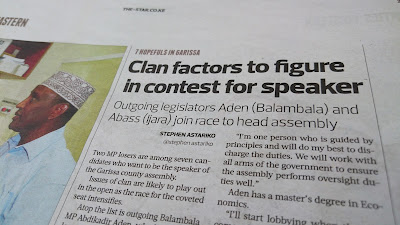 It appears, for example, that I can't figure out some of the numerous meanings of the word figure.

At first glance, I was so sure the headline for the above article:


"Clan factors to figure in contest for speaker"

...was not making sense. The correct version, I immediately thought, should have been:


" Clan factors to feature in contest for speaker"

I now know the figure of various definitions of figure is quite high.

It can be a noun, verb and even figure of speech.

Email ThisBlogThis!Share to TwitterShare to FacebookShare to Pinterest
Labels: Figure