In a shocking violent act, during the protests that followed Kenya's General Election, a six- month-old infant is believed to have been clobbered by anti-riot police. The parents' pain is unimaginable, after the demise of their little one. The local electronic media extensively covered this prevalence of police brutality. It appears though that there was some ambivalence in how the story was treated by a section of the print media. 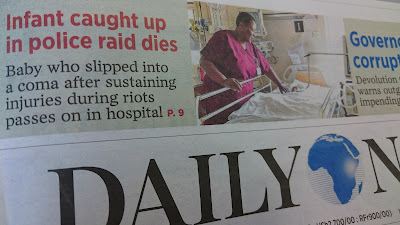 How else can one explain the front page teaser of such an evocative story, in the country's leading daily? The heading 'mildly' states:

It's as if the police are being absolved from blame. One can even conclude the tragedy was accidental.

Notice the difference with the main story, tucked in the inside pages. 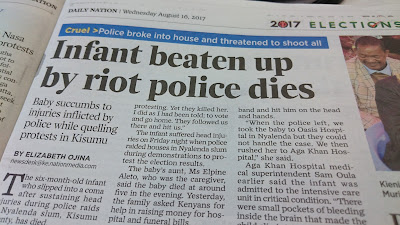 The impression is that this was a deliberate act and the riot police are directly responsible for the infant's death.

Why didn't the front page teaser read something close to:

One can almost detect something sinister, here.

Whether it's fear by the paper to represent the entire truth, or tactically seeking to distance itself from prominently apportioning blame, it's clear in this instance that this sad story, is being handled subjectively.
Posted by Albert Gachiri at 21:02