It's been a grueling last few days in Kenya, in yet another competitive General Election. The actual polling day was remarkably smooth, with only a few challenges. Then came the tallying of votes and all manner of electoral malpractice allegations started to be thrown around. The media had a difficult task of verifying information. But in the end, a winner was officially declared. 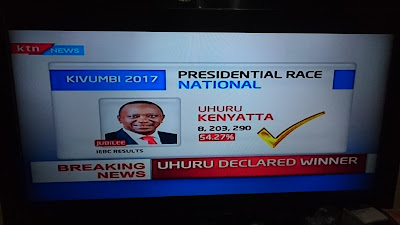 Covering the election as a journalist is not an easy affair. The pressure to deliver timely and factual content is almost unbearable.

Many local newsrooms were on a long-haul mode, interspersing live updates from main studios, with live links to reporters scattered across Kenya.

All manner of political analysts and pseudo-experts were also accorded acres of space and copious airtime to either showcase their grasp of issues, or 'regale' the audience with their ignorance.

And not many people were satisfied with the media coverage.

I, too, had many a cue cringe moments, especially when rookie TV reporters had their on-screen moment of fame, (or is it infamy?), or when the calibre of questions being fielded at pressers came off as a tad elementary.

In all fairness though, the media did not utterly disappoint.

There's always room for improvement, but there were positives to build on. And that's my point!