Doing a background check before writing a news story, should be an easy task. Supporting facts can now be sourced conveniently in this digital age, where the Internet is a living and ever-growing library. That's why it's hardly believable that a Kenyan newspaper can't distinguish between a song, and a son of a famous Jamaican singer. 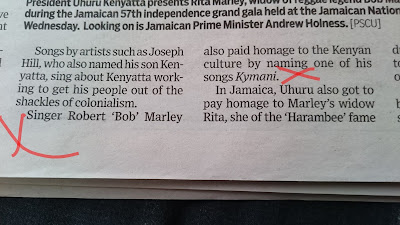 In the article above, the writer tries to enrich and provide a wider context in the recent visit to Jamaica by the Kenyan president.

The coverage is woven around the historical struggle for freedom from colonialism by the East African nation, and the influence of independence proponents from the Caribbean island.

And no reference to Jamaica is complete without mentioning its pulsating reggae industry, which is relevantly captured in this article, given how its global music icons have been committed to the struggle against social, economic and political injustices. 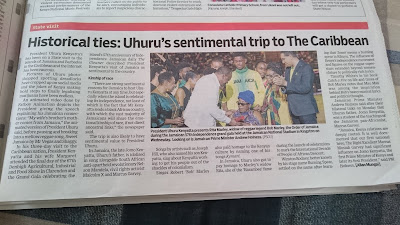 Evidently, a lot of research went into piecing together this newspaper story, so it's a bit mind-boggling why the writer and sub-editor would mess up on the details around the life and music of such a recognised music legend like Bob Marley.

I'm not entirely sure if there's a linguistic connection between the name, 'Kimani' from Central Kenya, and the 'Kymani' with Jamaican roots.

But what I know, and what the writer and editor of the article ought to be aware of, is that Ky-mani is Bob Marley's son, not one of the songs from his impressive repertoire.

Please beware, an enlightened reader is not ready to sell their intelligence for a song!