OF CRITIC, CRITIQUE, CRITICISM AND CRITICISING

He's an authority, when it comes to matters to do with language: from origin to modern usage of English, Nilotic, Germanic, Indo-European...and practically any tongue under, or even below the sun. So, when he's criticising, its hard to find fault in the critic, his critique and brand of criticism. 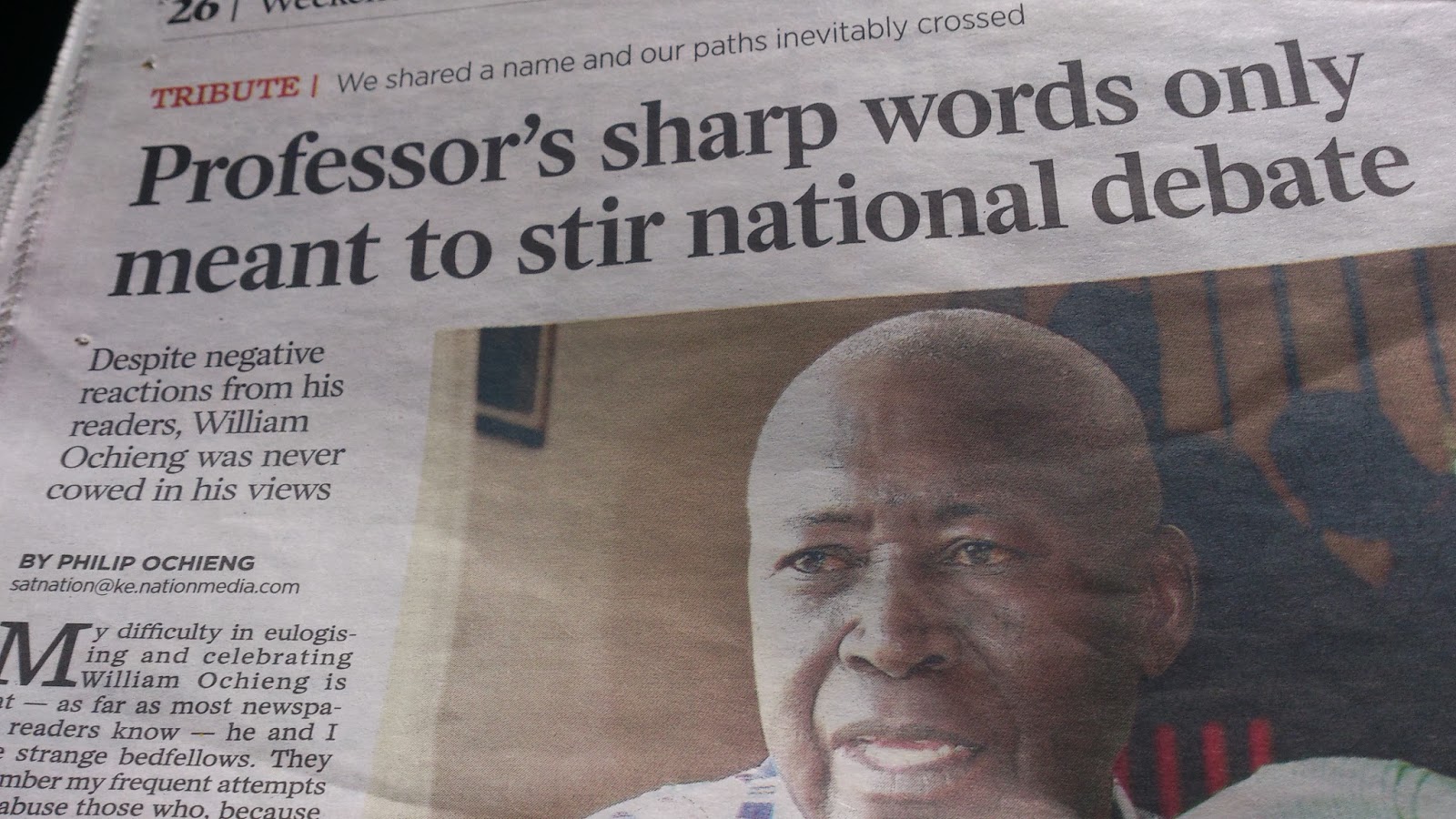 But one thing that Philip Ochieng excels in (etymological or otherwise), is confusing, especially the not so erudite members of his audience, (feel really free to include me in that category).

In his moving tribute to the late Professor William Ochieng, the renowned Kenyan journalist sought to clarify the positive impact of his 'literary attacks' of the historian. He says: 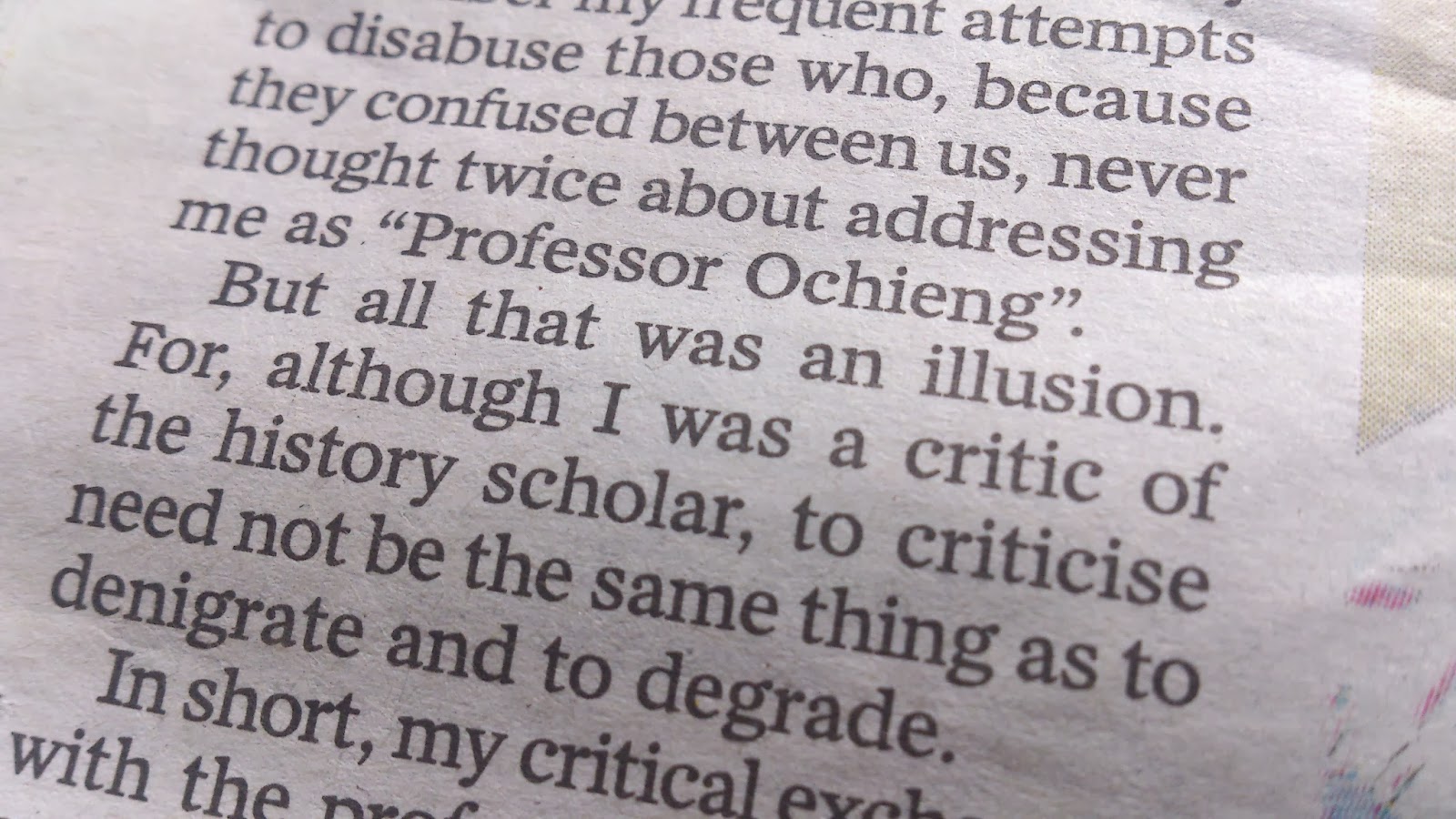 "...to criticise need not be the same thing as to denigrate and to degrade."

I immediately thought there was a contradiction there. To criticise denotes something negative right? The folks at Oxford dictionary even define it as:

"...indicate the faults of (someone or something) in a disapproving way."

Hang on. To criticise can also mean:

"...form and express a judgement of (a literary or artistic work

Still, there's a sense of negativity about the word criticise. And yet Philip Ochieng goes ahead to say: 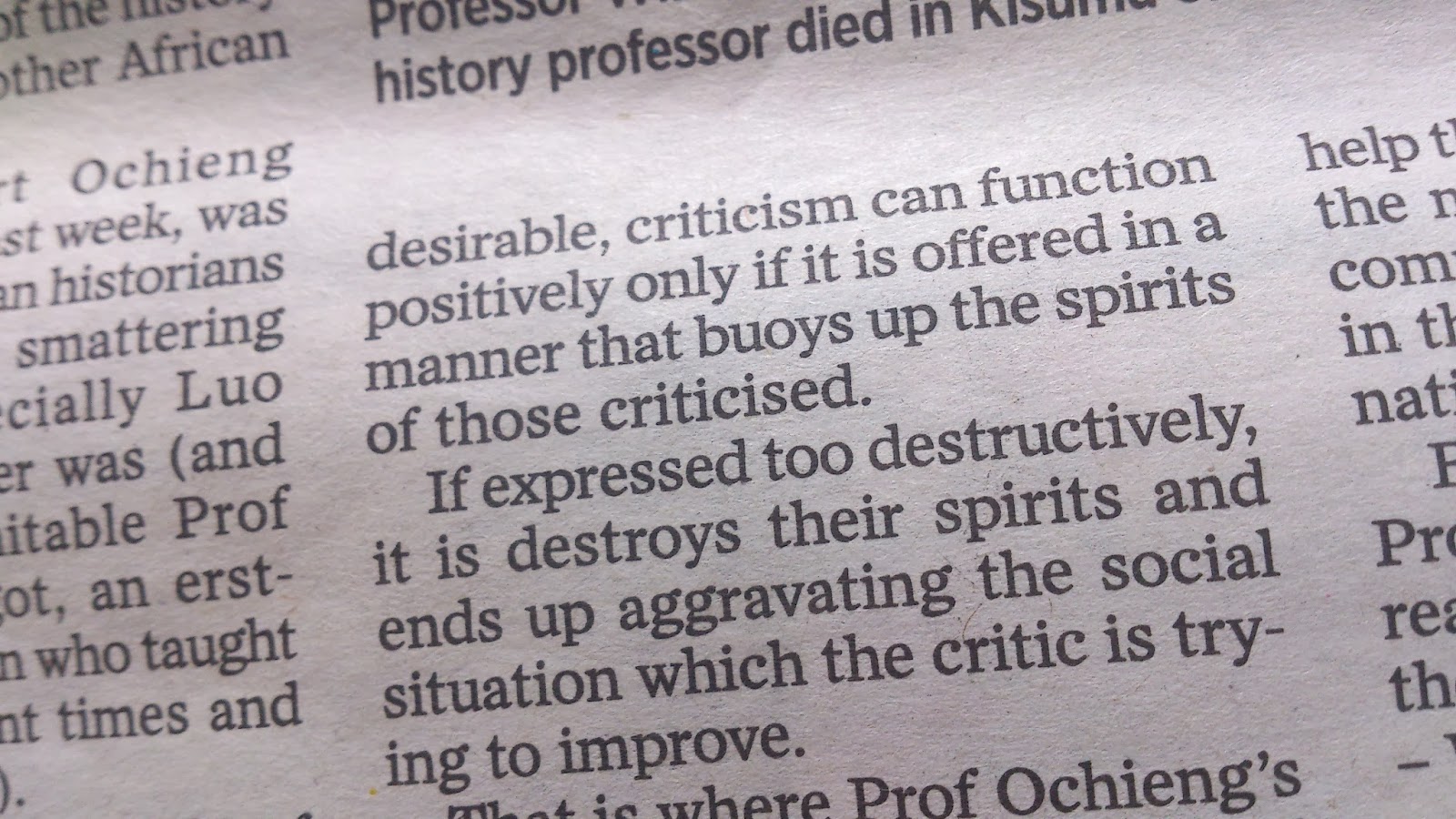 My conclusion is that, the point Philip Ochieng is trying to drive home should have been better expressed, using a neutral word like critique, and not criticise, (criticism is fine, don't be quick to criticise).

And had it not been that the newspaper article was penned by the 'Philip Ochieng Institution' I would have straight away faulted the paper's editor, for choosing the wrong word to express the right context. 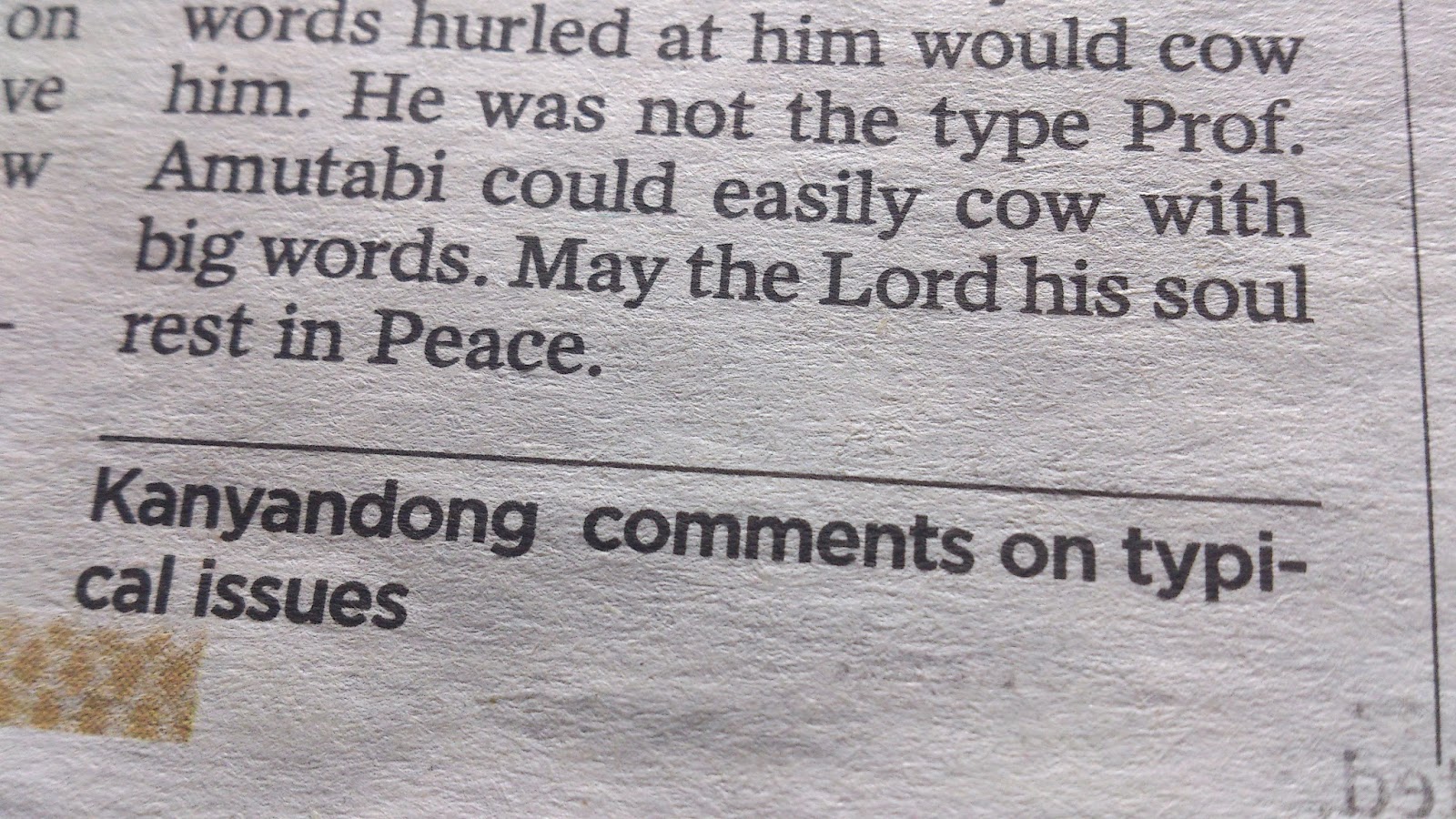 There is ample backup to suspect the daily's editor. Another article in the same paper, has a footnote saying the writer comments on 'typical issues' as opposed to 'topical' ones.

One other article did stir some intense interest in me. Another famous author David Mailu, was making a passionate appeal for Kenya's most recognised literary export, Ngugi wa Thiong'o, to return to his home country, from his American academic base. 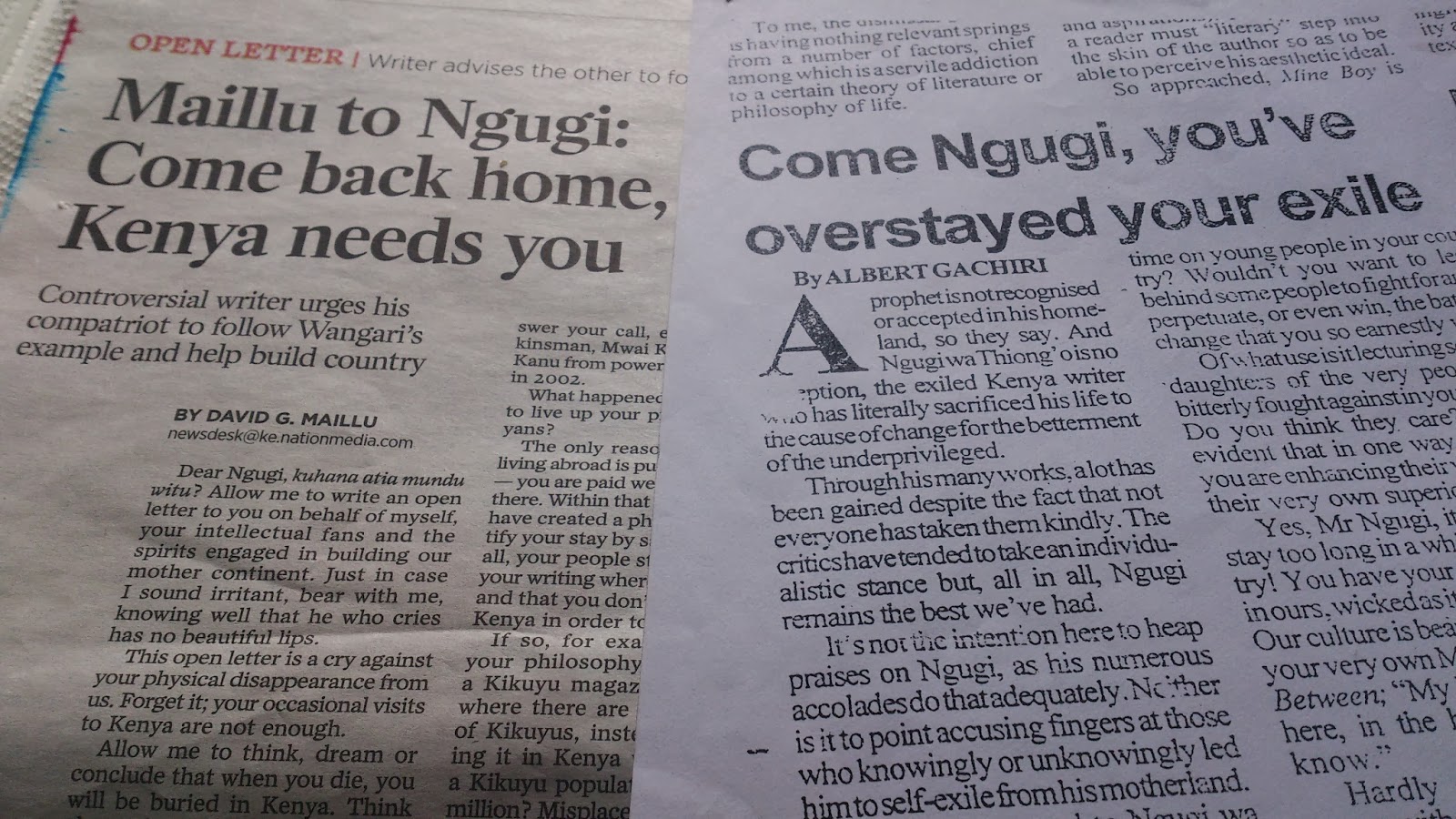 The main argument of this 2014 article, is exactly the same as what I had postulated in my very first published article, in the then People Weekly newspaper.

Somebody get me a walking stick please.