DEATH DESENSITISATION IN THE MASS MEDIA

I regret to announce the death of death in a dead Kenyan newspaper. In yet another display of malevolent ineptitude, many readers have been left aghast by a sickening assault of ethical photojournalism. For all its editorial worth, the front page picture of a dead body robs humanity of the essence of being alive. 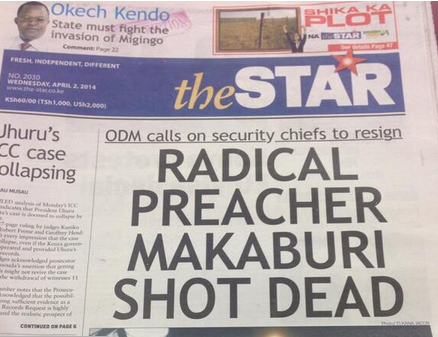 By eroding public sensitivity about the phenomenon called death, one runs a very high risk of also diminishing the value of life. That's what the editor elected to overlook.

Yes. Many have argued that the subject in the picture seemed to have been beckoning death with open arms, given his controversial views on recent terror attacks in Kenya.

Yes. Many people felt threatened by his direct and confrontational approach to resolving 'quasi-religious' differences.

Yes. The country's security apparatus was feeling immense heat from a public in dire need of reassurance that safety concerns are addressed decisively.

No. Elimination of perceived threats, without following the normal channels accorded by the country's legal system, undermines the rule of law.

No. The media must not spread further panic or augment animosity by stirring negative emotions.

And No. If the picture of a lifeless prominent person results in a newspaper selling all its copies, then there's something morbidly wrong with the paper's editorial policy.
Posted by Albert Gachiri at 15:01

Email ThisBlogThis!Share to TwitterShare to FacebookShare to Pinterest
Labels: Makaburi, The Star

The Star did it again. 3 years ago, they had Rogo's body (in his car) on the cover a few minutes after he was shot.

Now that's just plain distasteful. And if it's habitual, it's so shameful.